The Hating Game is The BEST 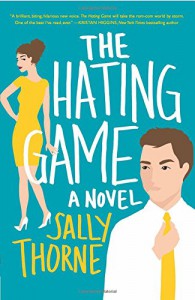 1) An opponent or rival whom a person cannot best or overcome;

Lucy Hutton and Joshua Templeman hate each other. Not dislike. Not begrudgingly tolerate. Hate. And they have no problem displaying their feelings through a series of ritualistic passive aggressive maneuvers as they sit across from each other, executive assistants to co-CEOs of a publishing company. Lucy can’t understand Joshua’s joyless, uptight, meticulous approach to his job. Joshua is clearly baffled by Lucy’s overly bright clothes, quirkiness, and Pollyanna attitude.

Now up for the same promotion, their battle of wills has come to a head and Lucy refuses to back down when their latest game could cost her her dream job…But the tension between Lucy and Joshua has also reached its boiling point, and Lucy is discovering that maybe she doesn’t hate Joshua. And maybe, he doesn’t hate her either. Or maybe this is just another game.

This might seriously be my all-time favorite book now. It was SO GOOD!!!! I have re-read it already and still think about it. The banter, their attraction, it was hilarious, it was steamy. It was hands down just awesome.

If you are a Christina Lauren fan, which I have most definitely become, this book is very similar to Dating You, Hating You, which I loved. But what’s different here is that Lucy and Joshua have been working together for a year...a year! And then all of the sudden, something changes not only with their work situation but their relationship.

I laughed so hard so many times. Lucy is seriously funny and Joshua reacts so predictably opposite - almost like that offset each other by extremes. But one day, the whole game changes and whoa, is it hot. They actually don’t really know each other, they know some things, but not really deeply personal things. They have to get to know one another and some surprising revelations are uncovered about just how long their attraction has been going on for.

I really loved this book so much and recommend that everyone read it. This is absolutely the kind of book I like - witty, fun, steamy - there aren’t enough of these out there and for what it out there, this one is most definitely at the top. 5++++++ stars.