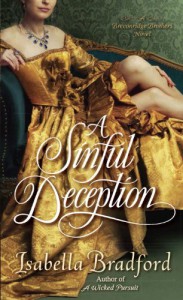 Lord Geoffrey Fitzroy leads a charmed existence. As the second son of the Duke of Breconridge, he has none of the responsibilities of his older brother and all of the advantages, leaving handsome Geoffrey free to enjoy his rakish pursuits. And pursue them he does, leaving hearts fluttering all over London. But one night, at a ball teeming with high society's most sought-after beauties, only one truly intrigues him: the regal, aloof, and mysterious Miss Serena Palmer.

Magnificently dressed and wearing jewels befitting a queen, the lady is considered the prize of the season, a noble-born heiress raised in India. But even as Geoffrey's fascination grows, Serena deftly deflects his curiosity—and with good reason: Serena's exotic past contains a perilous secret that could destroy her. Yet her plan to live in safe solitude is thwarted by her hungry heart, and soon Geoffrey's passionate seduction finds her blissfully bed—and wed. Will her deception destroy her chance at happiness as Geoffrey's wife? Or will the devotion of her new husband reveal the only truth worth embracing: her undying love?

This is an intriguing story. I love Regency era stories that include a piece of India. It was such an exotic place at that time with the sons who were not heirs trying to make their fortunes and not always in a lawful manner. Serena’s father was one such son, and Serena’s tragic history is brought out in the story gradually. What we do know is that she has a life-ruining secret and she maintains a distance from everyone as a result. Geoffrey is determined to meet Serena and break through her façade, and he is given a chance when he speaks Hindi to her. There are obstacles, however, not only with Serena’s own hesitation, but also in her family and their hatred for Geoffrey’s family.

I did not read the first book in this series, but found I didn’t need to. There were some allusions to it as it was about Geoffrey’s older brother and his wife and they feature in the story quite often. Geoffrey is a likeable, affable, rake who has set his sights on Serena. He is discouraged by everyone from toying with her as she is a gently bred lady and he hasn’t the best reputation. Their attraction and informal courtship is enjoyable and romantic. Geoffrey is a very considerate hero and despite his rakish ways, he is not jaded or arrogant. He will be on many top lists for best hero I am sure.

Serena’s secret really weighs her down and has her doubting, second quessing, and resisting Geoffrey until she really can’t resist him anymore. Her nightmares added a dramatic effect to the toll her body was taking by keeping her secret. It gets a bit tedious but at least she keeps moving on with her attraction to Geoffrey. You can feel the oppression that she feels in her family’s home. I understand that unmarried females were not allowed to go about unsupervised, but Serena truly had no freedom whatsoever. Geoffrey really had to be creative to find her alone. I loved the bookstore scene where Geoffrey followed her to and approached her.

Bradford writes their love scenes well.   There was emotion in their coupling and all their encounters were nice (meaning hot). There were a few of them too which I always appreciate.

Spoiler here – the only disappointing thing was how flat the reception of her secret was to everyone around her. Serena is so consumed with the expectation that she’ll be tossed out by Geoffrey that she runs away, yet Geoffrey is like “meh”. I would have expected him to be more disappointed and annoyed that she didn’t share her secret and trust him, etc. etc., but he was immediately accepting and for the most part, so was his family. I think it could have been a bit more dramatic and would have added a little more to the intrigue of the story.

Overall, I enjoyed it and would recommend it. I will now have to read the first one and then the third book as well when it is released.

Thank you to the NetGalley for the ARC.